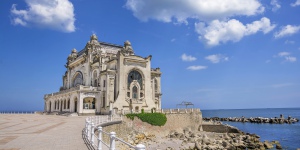 In the afternoon, transfer to the hotel. Free afternoon for relaxing. If clients are after long flight journey, we suggest dinner with European food at the hotel.
Overnight in Bucharest.

Breakfast. Around 09:30-10:00 departure in sightseeing tour of Bucharest.

Visit of the Parliament`s House, the world’s second-largest building in surface area (after the US Pentagon) and the third largest in volume.

Visit of the National Museum Cotroceni Palace, the official residence of the Romanian President, built on the site of a former monastery.

Transfer to the hotel for a short rest. In the evening transfer from the hotel for traditional Romanian dinner in “Caru cu Bere” Restaurant in Old Historical Center - the oldest beerhouse in Bucharest, a traditional place and impressive architectural building, where you can taste culinary recipes or drink homemade beer. Every evening there is show with folk Romanian dance & music and other surprises!
Overnight in Bucharest.

Breakfast. In the morning departure to Constanta on the highway for a 2,30h journey.

On the way, stop at Murfatlar Winery for Lunch with Romanian dishes+Wine tasting and visit of the Vineyard and Wine Museum, an impressive collection of wine presses, proof of Dobrogea`s noble wine-making tradition.

Trip continues to Constanta, Romania's largest sea port at the Black Sea with a history some 2500 years back, founded by Greek colonists from Miletos in the 6th century BC and known as Tomis, then was conquered by the Romans in 71 BC and renamed Constantiana.

In the afternoon, panoramic sightseeing tour including the most important landmarks: Ovidiu's Square, The Roman Mosaics, The Great Mahmudiye Mosque (1910), St. Peter & Paul Orthodox Cathedral (1885), The Casino (1910), The Genovese Lighthouse (1860).
Transfer to the hotel. Overnight in Constanta.

Breakfast. In the morning departure to Bulgaria along the The Black Sea shore passing Mangalia, Romanian`s second most important harbor mainly for military purposes and ship repairing, an Ancient Greek small town known as Callatis for its several minor archaeological sites and health centers.

At 70km. distance from the border, stop in Balcik, a small resort on the Bulgarian Black Sea coast and a historical one with many culture influences: Thracian, ancient Greeks, Byzantine, Ottoman, Turkish and Romanian; small houses, Orthodox Church, harbor. Visit of the Balchik Palace, the favorite summer residence of Queen Marie of Romania, built between 1926-1937 during the Romania`s administration of the region. The impressive palace has Balkan and Oriental architectural motives and consists of residential villas, wine cellar, monastery, chapel, holy spring and a huge botanical garden on 65.000m2.

After lunch, departure to Varna, the third city and maritime capital of Bulgaria, the most interesting and cosmopolitan town on the Black Sea coast. Walking tour including the most important highlights: The Archaeological museum, where in three especially dedicated exhibition halls is presented the oldest processed gold in the world –4600-4200 BC, The Cathedral – one of the symbols of Varna, a perfectly preserved example of Orthodox architecture, The Roman Baths – the forth largest known Roman baths in Europe and the largest antic public building in Bulgaria.
Overnight in Varna.

Breakfast. Free morning for walking, sunbath, shopping. Around 11:00 departure to Romania. Crossing the town from south to north to the airport, you`ll see the Martyr-Heroes of the December 1989 Revolution Cemetery, where many of the 1000 victims of the 1989 revolution are buried. If time permits, before arriving at the airport, walking in Herastrau Park – the largest park in Bucharest or stop to shopping center. Transfer to the airport. End of the trip.